Often I’m asked some variation of this: “How do I take my musical skills to the next level?” And my answer, no matter what the skill level of the person asking, is to better understand music theory.

It’s hard to put in to words what theory is. I compare it to the grammar and usage rules of a foreign language. Sure, you can get by without ever learning them, but if you want to seriously master the language, learn to read or write, or better understand it in general, absorbing these fundamentals is the most effective way–and the most tedious.

Fortunately, technology is making it easier…or at least more accessible. Tenuto is an app and website dedicated to music theory. It contains over a dozen exercises and quizzes for that range from the basics (name the white keys on the keyboard) to the scary (is this a diminished seventh chord or a half-diminished seventh chord?). Everyone from the struggling music major to the casual guitarist can have an impromptu skill-sharpening session any time.

There’s a section of the website dedicated to theory lessons that explain in detail a variety of different musical concepts with animated step-by-step visuals, but I could see this being confusing for a lot of people. It’s hard for me to say (I do kinda know this stuff already) but I think most people will be better off having someone guide them through rather trying to figure it all out by themselves. I could be wrong, though.

When I teach, Tenuto serves as a set of high-tech flashcards. I constantly quiz my students over note names, key signatures, chords, etc. and can easily switch from one thing to the next. The quizzes are easy to customize so I can make a less-challenging version younger students. Tenuto randomizes the questions keeps a running tally of correct answers and against number of answers (you don’t pass a question until you answer correctly) and gives the percentage as your score. I don’t punish them if they get a low score; for most students, a low score is punishment enough, and it usually only takes one or two more sessions before scores improve dramatically.

The website contains all the features that the app does, but I think Tenuto’s at it’s highest level of effectiveness on smartphones and tablets. Do you ever notice how kids seem drawn to screens? They eagerly figure out how to make apps work, and this applies doubly for games, which is why I recommend presenting it to young students if you’re a parent or teacher. It’s like they have an innate desire to win and will redouble their efforts if they think they can. I highly recommend shelling out the $5 for the app for this reason alone.

So Tenuto comes highly recommend for teachers, but I can also recommend it as a student. If you’ve been following my exploits, you know I’ve been teaching myself guitar recently <insert link> and that I need all the practice I can get. There a few quizzes dedicated to the guitar which, when I remember to take them before practice, cut down immensely on the time it takes me to figure things like scales or melodies out. Also, the ear-training portion of the app is the next best thing this side of a music degree. 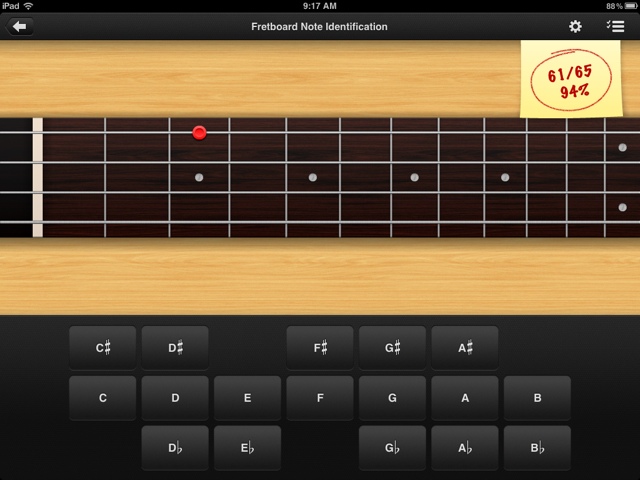 If there is one thing that could make Tenuto better, it would probably be a section dedicated to rhythm. It’s really the only aspect of theory that’s not really represented. Fortunately, the developers continue to update the content , so this may eventually be rectified in the future.

I should mention that I’m not receiving any kind of compensation for this review. I’ve never been paid to endorse anything, actually, which is a shame because I would totally take someone’s money to write some nice things about a product I really thought was useful (I’d probably do it even I thought the product was just meh). Every now and again, though, someone creates something truly exceptional and I have no choice but to wave my endorsement fees and give credit where credit is due.